On April 1, 2022, the Verkhovna Rada of Ukraine adopted in first reading the draft Law “On Compensation for Damage and Destruction of Certain Categories of Immovable Property as a Result of Combat, Terrorist Acts, Sabotage Caused by Military Aggression of the Russian Federation” (№ 7198 of 24.03.2022). While the bill itself is a positive signal to the citizens, its mechanisms seem to be unimplementable in practice. Our community provides its expert suggestions on what such a law should look like. 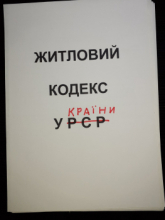 The Parliament of Ukraine has adopted the Law "On De-Sovietization of the Legislation of Ukraine". According to Ruslan Stefanchuk, the implementation of the law also requires the Cabinet of Ministers of Ukraine to develop and submit to the Verkhovna Rada of Ukraine drafts of the Housing Code of Ukraine, the Labor Code of Ukraine and the Code of Administrative Offenses.

Meanwhile the professional community has big questions about the Housing Code. The fact is that such a code is in itself an anachronism, a relic of the soviet past. Real de-sovietization of Ukrainian legislation means declaring the Housing Code repealed. Let us just bury this soviet corpse - instead of resurrecting it under a new name.